Journal findings on an artist friend 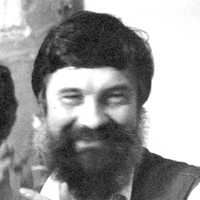 Leonberg, Germany, Spring, 1983: Construction and destruction of a war ship in Leonberg's centrally located Cafe am Markt. The ship, a dragon in 20 meters of suspended aluminum duct, curving serpentine across the low cut ceiling would consume what little space the cafe goers had, as if the whole cable and pipe gut of the building had virtually exploded across the room (The coffee tasted somehow different that day). Had it not have been for Márkos story telling talent, few seekers would have learned of the real "ghost" ship, and the actual flying Dutchman somewhere near the northern Norwegian coast, that had inspired Márkos in the first place. Of course, who, but Márkos could ever have found this treasure island, and together with the real dreams of a true captain, sail (sinking) into his sunset, somewhere between the here and there (Americans refer to it from time to time as never-never land). Back to Leonberg: The memory can't release him until he actually enacts his own war ship, and alas, destroys it lest it fall into the wrong hands (In the weeks thereafter Márkos was bushwhacked by some misunderstanding natives, and paid the price of two weeks hospital for "repairs" to his face). In the happy end story itself still lives on, salvaged for future generations!

Schweinfurt 14 July 1984: Destruction of the art form as a self-recreating metamorphism of state, forever differentiating present from the past: A whole parking lot covered with painted paper sheets, to be sub-divided and sold sheet-wise for a children's benefit. A painting, destroyed first symbolically by use of an exploding aluminum duct flying overhead, and then actually destroyed in the piece-meal cutting of the original work: Art power to purchasing power in dedication of selfless good. For Márkos a consolation in the cosmic constellation that all creative matter is forever disintegrating and re-forming creatively. That the works of the artist ceased to exist in their original constellation allowed at once for their virtual re-creation into ever newer forms. The pain of deprivation is born on the lack of recollection more than on an object's loss: That we usually discover value for recollection's sake after the (destructive) fact is more the rule than the exception, or: you don't know what you've got till its gone.

Paris: 3-29 October, 1984: Clausur with Die Gruppe (among other, the artists, Bunsen, Mendler, Márkos, Fabritius): Márkos has packed the past into new time forms, and as if it were, hung them out to dry. Black plastic bags of trash suspended in open space in the catacomb like space of the 1200 square Meters of the City Gallery, d´Esplanade de la Défense. The director of German ministry in Paris had agreed to give the introductory speech for Die Gruppe, but found out that the artist group hadn't imported any pictures of so-called traditional value, and what's more they were still "painting" their installation in the days before the opening! The risk of an affront weighed just too heavily. The leading officer of the French air force, on leave from Egypt that week, discovered us one afternoon, and found favor with our unexplainable motivation to do what we did. Throughout his daily company the officer proved the best commentator of a seemingly senseless and non-compensating approach to life - in the absence of official commendation (Unfortunately his son was later killed in the crash of a military jet he was commandeering).

Heimsheim castle - December 1, 1984 with Die Gruppe (among other, the artists, Bunsen, Mendler, Márkos , Fabritius): Collected throw aways and trash painted over in a cloak of white, for Márkos relics of societal castaways. His final arrangement, apart from its original state, was sensitive and poetic, setting into motion a dichotomy of "he loves me, he loves me not". In an oscillation of forgetting and remembering the observer could only differentiate between values of the precious and the non-precious in deciding at which stage each object should be retained and what should be disposed of, killed, run-over, destroyed, forgotten.

Dortmund, Germany,1985 (May) tent site: Life, portrayed as a transitory station - and Márkos, the artistic hobo. I was never sure what he really did in the tent, but maybe it didn't matter. He set his "tent" in the middle of urban Dortmund as a hindering to the great sea of life flooding unconsciously past - that is, until some met Márkos, his existence bearing down directly in their path. Or to quote John Lennon: Why don't you do it in the road?

The reader may care to ask: so how would a ghost warship, the tomb-like premise of the largest underground city gallery of Paris, the Kafka-ic setting of a German medieval castle, a tent in the middle of metropolis, Dortmund, and 20 meters of exploding aluminum duct define the artist's life line?

Arriving home to the world of András Márkos would mean an involved alertness in his continuous state of artistic passage, moreover in the self reflecting analogy of our own lives. Experiencing the sequence of his installations throughout the years celebrates his work in the historical context of time transition, joyful of life's quintessence. For those still catching up there's one consolation: Contrary to time the artist's picture imagery stays invariably the same. Though for Márkos the painting process has already begun somewhere else. Long accepted by the world as a legitimate art form of stage-like props and the unexpected, installations, for whatever meaning they choose to evoke, are still the revelation of time passing. The installations of András Márkos amount to such constellations: Installations on time, in time, just plain old timelessness, neither ready-made, nor junked, a form of transitory past. And should we stop to ponder, therein is marked the preciousness of humankind in its own fragility. Eyewitness account: Each of Márkos' installations - conceived in the creative perception of an internal observer (artist), and reception by an external observer (non-artist). Neither journalistic reflection on a trendy practice, nor so much the philosophy of the artist's underlying drive can conciliate moments of art recognition (form differentiation). The western world might even seek, more than is good, a meaning in the psychology of Márkos' intent, wishing to incise the soul of his so-called "inner" involuntary motivation. For my part, I choose to observe.

Still, some "critics" can't help but jeopardizing art communication - self proclaiming art authority in the portrayal of art meaning. On the other hand, genuine art authority lies inherently in art's own power to differentiate its own art form, allowing the observer entry through discernible codes. In recognition and reception thereof, we, the external art observer, might begin to grasp that which we cherish so much, yet acknowledge so little - freedom.