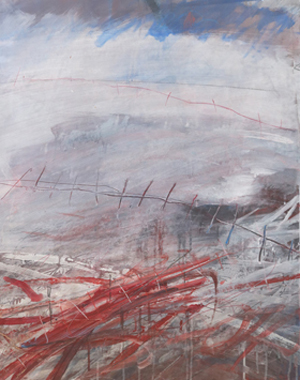 Death is "the oldest of all fears" - was written by Emil Cioran. That's right. This final moment of a man's biological existence has long raised the question; end or beginning? Intellectual insights cannot remove our ignorance. In Emanuel Levinas' words, "death is the least known phenomenon among the unknown". Natural sciences also lose in confrontation with this mystery, in spite of their sensational progress. Biblical tradition has passed on to us the image of death as the punishment for the sin of disobedience to God. We are therefore born to die. Today Martin Heidegger described it as "Sein zum Tode. The question about death is also a search for the essence of life, the source of being, and consequently a question about the absolute and sacrum. In the face of these mysteries, man has always felt fear. The fear of the unknown, underpinned by religious faith, was dominated by a belief in the possibility of crossing this incomprehensible threshold, a belief in immortality and eternity.

The stylistic pluralism, typical of the last decades, excludes canon and norm. They are replaced by the so-called "own mythologies" - to use a term popularized after the Kassel Document V exhibition. The relativism of values present in culture forces artists to search individually for answers to the fundamental questions that reality brings. One such challenge is death. Most often, it is mythologized, in the form of allegories, often colored irony. It is a rare case that we take up the problem of eschatology in relation to the Christian faith. These accounts are occupied by Frederick Bunsen, whose work could have been presented as part of the "Passage" exhibition last year at the National Museum in Wroclaw.

In the circle of European culture, a common way of presenting death, a phenomenon of a spiritual nature, was its personification. The tradition of Thanatos and "The Tannins of Death", based on the figurative representation, made it possible to express the interpretation of religion, emotion and moral. The process of passing, rising and dying was found. The process of passing, creation and extinction found its analogy in the natural world. And it was also a symbol, a metamorphosis of life and death.

The departure from the mimetic reproduction of reality, which is characteristic of contemporary art, opened new possibilities of artistic creation. The former helplessness in the face of the phenomenon without form gave way to the conscious desire to present non-physical existence. The theory by Wilhelm Worringer about abstraction as a higher form of art - being a result of inner anxiety towards the external world phenomena - has provided a foundation. Also decisive was the pioneering work of Wassily Kandinski, who drew a lot from the theosophical interpretation of spirituality as a formless being. Half a century later Josef Beuys referred not only to the thoughts of Rudolf Steiner, but also threw in a slogan to restore the original Christian values. Beuys's voice was a call for subjectivity and a search for a spiritual element in life and art.

Bunsen, a Texan by origin, has lived in Germany for 20 years. He studied natural sciences at the University of Corvallis, German studies at the University of Stuttgart and at the local Academy of Arts. Already during his studies, he became interested in the phenomenon of death and dying. His fascination with this subject led him to seek transcendence in art. The effect of intellectual speculation was, among others, the publication "Unbeobachtere Welt" (Bielefeld 1990), developed together with philosopher Niklas Luhmann. Bunsen paints, is a graphic artist and organizes performances. Among the painting and graphic works on display, some have been titled: "The Cross (Cross)", "Holy Trinity". It is in vain to look for traditional symbolism in them, in vain to look for the image of God. Crossing lines, transparently overlapping planes create a strong spatial perspective, optically drawing one into the picture. Among these diagonals, vertical and horizontal forms, one can find hidden skull outlines or skeletons. Traces of vanitas in the chaos of forms, in the more vague, traces of destruction of reality. The motive of a cross or a barbed wire suggesting Christ's dark corona, appearing in the tangle of lines, has an archetypical meaning apart from the reference to the Christian tradition. The cross, a symbol of symbiosis of time and space, was also a crossroads of the living and the dead. For Christians, it was a sign of suffering and triumph of life over death. The Trinitarian motif, characteristic of the beliefs of many old cultures, is the basic dogma of Christianity. Bunsen denies presenting this dogma and paints a "dialogue between life and death" in confrontation with religious experience. The transition to death occurs through the cross. Faith awakens hope that this transition is possible. The mystery of death is preceded by dying, inseparably connected with suffering. The hospital bed, which was the culmination of the exposition, is today a silent witness to the pain of dying.